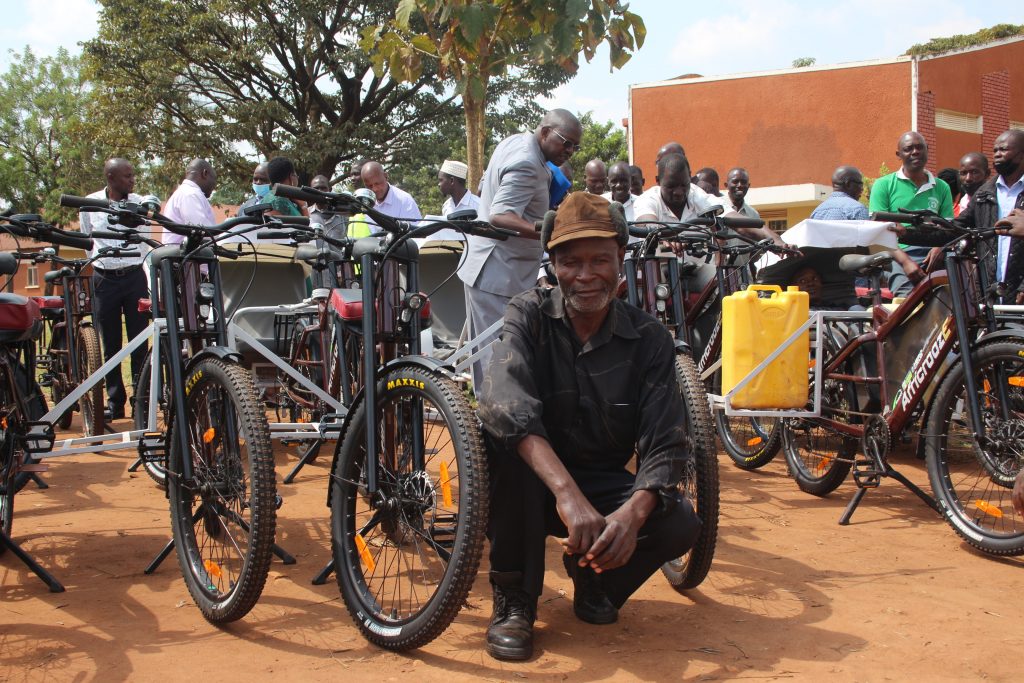 Good News from the E-Bike Project

We are happy to announce two goods news from one of our current main projects, the AfricroozE E-Bike project. Within the week of the handover of the last 25 bicycles in Iganga we were also able to collect some of the good feedback that was brought to us. This feedback was really important to us for seeing the impact of the bikes on the beneficiary’s livelihoods and give us motivation to continue and impulses on how to improve this project. The African E-Bike project aims to improve livelihoods of people and communities in different situations in a sustainable way and to promote E-Mobility in African countries like Uganda. Therefore, a Ugandan-German team designed an E-Bike – the so called AfricroozE – satisfying the special requirements for the Ugandan conditions. Read more about the project here. 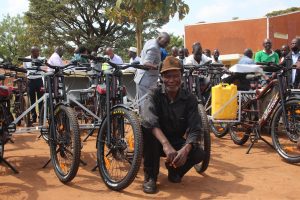 The last weeks have been busy at the FABIO office. While our mechanics constructed bicycle ambulances, E-taxis and water bikes around the clock, the organisation team had loads of work inviting our guest and organising the logistics of the event. The – at least for now – last big handover of AfricroozEs was about to come. In the morning of Wednesday, July 27 five bicycle ambulances, five water bikes and 15 E-Taxis were loaded on a truck from Jinja to Iganga. After inspiring speeches from local honourables the 25 beneficiary (groups) were having their first rides on the new bicycles. From now on they are able to charge their batteries in a service center located directly in Iganga town. As it is in Jinja, there the power from the sun will be transformed to the power of motion – not only the motion of a bicycle, but also the motion of single destinies and the mindset of a whole society.
Besides this 25 bicycles that you can nowadays find in the streets of Iganga the projects includes water bikes, ambulances, delivery bikes, E-Taxis and bicycles which can be rented by tourists in Jinja. Partners all over Uganda and Kenya also received few of the 100 bicycles. The feedback we received was mostly positive. Besides some technical issues the AfricroozEs help people to earn a living while saving the environment. For Uganda the social aspect is the most important thing, but especially our German partners put also emphasis on the second aspect, because the climate change will negatively affect social structures in future and already now. Especially self suppliers suffer under changing seasons, droughts and rising sea levels. This is the reason why we are very happy to receive many positive stories, how these bicycle can be used and change peoples lives. 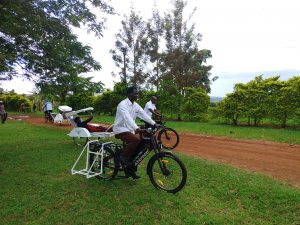 For example Nabirye Rose a single mother of Buyala used her water bike to fetch water and firewood. She has an easy access to the markets and hospitals in her region and her back stopped aching. Additionally, she is now able to save some money for paying the rent of her small house. Mr Kalange Sulaiman has got an E-Taxi with which he regularly carries clients, e.g. his neighbors children to school. Due to the AfricroozE he can afford school fees for his six children. Like others, the bicycle makes him feeling a responsible and valuable member of his family and of the society. Another positive story is about Bwambale Selevestor, who works for the delivery unit of the Hotel Paradise. Nowadays he saves a lot of money for fuel that he previously literally burned to smoke. By means of the AfricroozE the health center of Namagera village is now able to transport sick people (especially those with HIV/AIDS) and pregnant women from their homes to the center. Additionally, the doctors of the hospital are able to do home visits, for patients who can not come to the center. You can read more about the current success stories on our Downloads Page.
All in all FABIO is very happy to announce these good news which, hopefully, are just the beginning of a long lasting and successful project. Our appreciation is to all our supporters and donors, without whom the project would not have been possible.